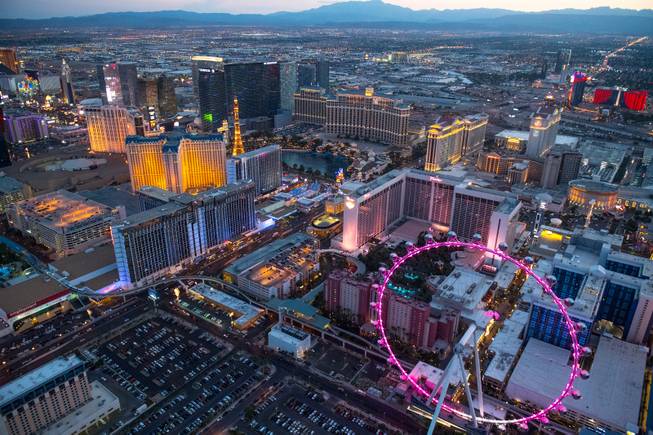 Locally, hotels are adding convention space and remodeling rooms, the Fontainebleau and Alon deals generated buzz on the Strip and construction cranes are rising at the Resorts World site.

Southern Nevada recovered from the worst of the Great Recession, outpacing national economic growth in the past couple of years. How long that run can last, though, remains a question for debate among experts.

According to the National Bureau of Economic Research, this recovery, at nine years, is the third-longest in U.S. history. Expansions have lasted on average only a little under five years since 1945.

The Las Vegas Sun asked a number of business experts recently for their opinion of Las Vegas’ economy.

“I don’t think there’s any doubt … if you look at Nevada and the Southern Nevada economy, the rate at which it is expanding is slowing,” he said. “It’s been a trend for the last 12 months.

“The slowing of the economy is inevitable, but it has nothing to do with (a specific) timeline. It has to do with the circumstances. In a normal business cycle itself, the levels of growth the state and community have experienced will be difficult to sustain over the longer term.

“On the other side we have a $1.5 trillion stimulus in the form of the tax package, although I understand some view it that way and some don’t. That freeing up of capital for investment and revenue could sustain a longer period of of growth that will ultimately benefit Southern Nevada.”

Aguero said the overall outlook for the Las Vegas economy is mixed.

“I do think the next two to three months is very important to seeing how long term or how extensive the impact of the Oct. 1 events are. The convention calendar going into 2018 is important.

“Then there are (other) things. No. 1 is the construction of the stadium, No. 2 is the convention center — the construction of that project — and No. 3 is the extent to which other multiple projects (Resorts World, Paradise Park) take form … All are slated for 2018 and all built under the expectation that Las Vegas still has room to grow.”

Joseph Otting, Comptroller of the Currency

“It is one of longest recoveries we’ve had in modern history. But remember, there’s also been a very long period of time where gross domestic product was only 1-2 percent. If you look at most economic recoveries, the first six to eight quarters are much steeper from a GDP perspective.

“I’m observing more optimism … I think it’s all about jobs. Most of the time, most jobs come with health care and lot of good things, and so people are able to take care of their family and add to their savings. It is going to get better. I think we haven’t had wage inflation and we haven’t seen full employment. So we have a lot of people who left the workforce coming back.”

(CAI recently broke ground on a 9-acre commercial development across from the Palms.)

“I think we’re just in the middle part of the business cycle. Cities like Los Angeles, Seattle, the coastal cities and the gateway cities are four or five years ahead of us in the cycle. In Las Vegas, we are an isolated island. We were unique because for years a lot of local investment and capital came from local families, local banks and local capital.

And when the recession hit and some of our largest employers went into bankruptcy, that trickled through the economy and really put a drag on the start of our recovery. So Las Vegas I believe is four to five years behind.”

“I would agree with the view that Las Vegas typically performs better later in the cycle, when you think about discretionary spending whether at the group level or the personal leisure level. The more comfortable people feel about savings and profitability on a personal or company level, they have comfort and are spending more.

“It doesn’t look like a recession is imminent. I think everyone is waiting for a signal. Maybe interest rates to signal a turn in the cycle. I think we’ve got a couple of years to go.”

“The economy is trending up and when people are doing well they tend to move up and are more likely to make that change.

“And as long as tax reform doesn’t mess with it or something completely out of the ordinary happens, we’re really in a good spot in this town … I’m very bullish.”

“In the more near term, we probably view (the economy) more favorably. From a citywide perspective, it’s good you don’t have two or three things going up. But we’re being more vocal that the recovery in Vegas is getting pretty long. We’re seeing a lot of the indicators that we pay attention to reaching or surpassing prior peak numbers. We are starting to be more cautious on Las Vegas.

“In terms of occupancy, it’s pretty strong across the Strip. It’s pretty much the same regardless of where you look, visitation is coming in with decent growth. Everyone’s been able to raise prices.

“We do still think there’s a marginal upside on the Strip. You don’t have any immediate near-term supply coming online and everyone’s building new convention space. If you ask about it, they all seem to agree there’s a sense of pent-up demand and they’ll be able to fill it.

“From a convention perspective, there’s still a little bit of a way to go.”